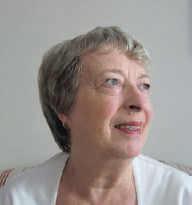 Ann Farrant (1939 – 2019) was educated at Norwich High School. She trained as a journalist with Eastern Counties Newspapers (now Archant) and has worked in many branches of the media, including BBC Television, newspapers and magazines, much of it on a free-lance basis while raising her family.

She was honorary press officer on the steering committee which set up Norwich Puppet Theatre and a founder member of Cruse Bereavement Care in Norwich.

Her biography of Amelia Opie stems from her MA in Life Writing dissertation on Mrs Opie, for which she won the first Lorna Sage Memorial Prize and the PFD Prize for Life-Writing at the University of East Anglia.